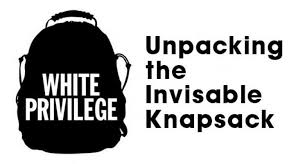 White privilege is the term for unconscious assumptions and practices that favor—or give privilege to– Caucasians compared to people of color. Implicit assumptions include everything from who has voice and authority in meetings, to definitions of success, to who is and is not feared when walking down a sidewalk after dark.

Having whites recognize white privilege is like a fish recognizing that it is swimming in water.  For whites, it is so natural and unconscious that unless it is brought to a consciousness, it seems invisible.  On the other hand, people of color easily see, but do not benefit from white privilege.  The less privileged confront the hard truths of exclusion, fear, and racism every day.

Peggy McIntosh has developed a powerful exercise for helping diverse groups recognize white privilege.  White Privilege: Unpacking the Invisible Knapsack, is a discussion-based activity that guides participants in understanding privilege as a concept and recognizing the ways their own privileges benefit them and impacts daily life. https://www.racialequitytools.org/resourcefiles/mcintosh.pdf

Everyone gathers in a line at one end of a large, unobstructed room. One-by-one, the facilitator calls out more than four dozen possible scenarios. A few examples:

Each time a person recognizes themselves in a scenario, they take one step forward. If the statement is not true for them, they remain in place.  Every time I have participated in the Invisible Knapsack, a few other white men and I (and sometimes a few white women), end up on the opposite end of the room from where we began. People of color are spread across the room.  Most African Americans are usually still near the starting line. People look around the room and share their reflections. Inevitably, many whites express surprise, unease and guilt; while people of color proclaim that the privileges whites enjoy ought to be obvious. The exercise is a visible, kinesthetic way of bringing unconscious assumptions about power and privilege to consciousness.

White Privilege is Not About Being Mean

I am convinced that most white Americans who consider themselves good, decent, and not racist are unaware of the insidious impact of their white privilege. They sincerely believe that they never racist and resent the accusation that they are. Few people like to be told they are uncaring or insensitive. This reaction misses the point. White privilege is underwater, the below-the-surface part of a cultural iceberg.

So, what should the privileged do with the guilt that comes from a recognition of white privilege? Guilt is a powerful emotion. Sometimes it is a good motivator. However, guilt that boils over into resentment does no one any good.

From Guilt to Ally

The best answer to one’s feelings of guilt is not resentment towards the other. Nor is silence an antidote to privilege. The solution for a person of privilege is to become an ally with people of color. Make the guilt productive by acting your way into hope.

Here are a few examples:

Taking steps such as the above comes from consciousness of your privilege and moves beyond guilt. By doing so, you help build more inclusive and equitable workplaces, schools, and communities.

Order a Copy of THRIVE

Copyright © 2019 Mark Smutny and Civic Reinventions, Inc. All rights reserved. For permission to distribute copies of this article in any form, contact mark.smutny@civicreinventions.com .